I was approached by ABC Arts to speak about the complex and difficult Philadelphia accent employed in the new HBO Max / Binge crime drama "Mare of Easttown" starring Kate Winslet.

As with my Schitt's Creek interview, prior to this approach I hadn't watched the show, but I had previously done a lot of work researching the incredibly interesting Philly dialect for Red Line Production's Orphans, so diving into the content was intense, inspiring, and enjoyable.

I was delighted to shed some light on the complex details which make this dialect - one of the most researched dialects of English but one of the least accurately represented dialects in media - so fascinating.

"...one of the most impressive feats of comic performance you are ever likely to see. Curnow is in full command of his challenge... [He] races around the desk answering loud, imposing, dominating phones as he physically transforms into each of the personas he embodies. Speed, wit and comic timing are in perfect balance in a performance that almost can’t be improved upon." Lisa Thatcher

"Nick Curnow is superb, creating thirty eight characters in fifty minutes... Curnow’s ability to delineate such an enormous cast of characters is awe inspiring. The laughs come thick and fast. His vocal work is nothing short of extraordinary...  This is silver service satire." Theatre Red

"Curnow is simply fabulous in this piece: sympathetic as the harrowed Sam, neatly differentiating between the myriad of different characters." Theatre from the Back Seat

Interview on 2SER Radio's Stages with Regina Botros and Benito Di Fonzo (from 17:05)

"This is the acting equivalent of the high wire and it’s working without a net. Fortunately, there’s nary a falter form Curnow, who makes it a thrilling ride. Considering there are around 40 roles, it’s an astonishing achievement..." Lloyd Bradford Syke, Daily Review on Crikey.com 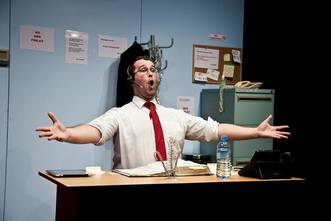 Photography by Katy Green Loughrey
"Curnow’s vocal skills were terrific. We recognised each character immediately and his nuance and range was impressive...It's a performance marathon." SOYP

"The experience of watching this production feels as though at a magic show, where the audience is kept fascinated, amused and gobsmacked for the entire duration. The actor switches characters at lightning speed, and we marvel at his ability in portraying such an astounding range of people, as well as his extraordinary memory, which in the absence of other actors, is the only thing he can rely on." Suzy Wrong (Suzy Goes See)

"...the deft swapping between characters is not only convincing, but hilariously entertaining, without being over-the-top. Curnow meets the challenge of the script with both scope and finesse." Jasmine Crittenden (Weekend Notes)

Hilliar has pulled together quite a luminous ensemble of cast and creatives. Both David Woodland, as Faustus, and Nick Curnow, as Luther, not only tick the boxes for what at least used to be considered standard equipment for actors (diction and projection), but flesh out their characters such that they become both believable and relatable. We can begin to have sympathy for both, regardless of how much we agree or disagree with their views and arguments. Crikey.com's Daily Review by Lloyd Bradford Syke

"Nick Curnow finds a beautifully human side of the devoutly religious Martin Luther..." Show and Tell

"Nick Curnow is good as the untested, still pious Luther, whose constipation has as much to do with his rage over the Catholic Church’s selling of indulgences as his meat and beer diet." Sydney Morning Herald (Jason Blake) 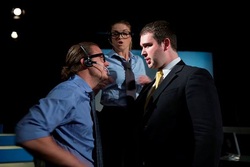 with Tristan McKinnon and Paige Leacey
"The character of Andy Fastow is played very beguilingly by Nick Curnow. Fastow idolizes Skilling and Skilling uses him abominably – until he realises his value – as it is Fastow who conceives and initiates the fraud that will become the ruination of ENRON and trigger the GFC. Nick Curnow finds all the intricacies and emotional levels that [Prebble] has written into this character. He is embarrassing in his original naivety and his hero worship of Skilling, enthusiastically erudite as he explains how the fraudulent companies will work, then more and more bemused as he realises the problems he has created." StageWhispers

"Andy Fastow ... is depicted as a tragic lion tamer [who's] lost control of the circus." Lisa Thatcher


"...Curnow’s Andy Fastow [is] a classic case of the accountancy whiz triumphing over his bullies at the expense of any integrity he may have possessed. We see how desperately he wants to please and will find anyway to do it." Shit On Your Play

"Nick Curnow gives an engaging performance as the socially awkward originator of some of Enron’s most dubious accounting practices." Theatre Red

"The main players — Young, Curnow, Flett and Cassandra-Lee Heschl as Skilling’s adversary Claudia Roe — are terrific. Their interactions, timing and characterisations are spot on." OzBabyBoomers

Photography by Bob Seary
"...man of the match has to go to Nick Curnow, whose turn as Lemming’s gay business manager Mason Marzac shows off his superior skills with an accent and ability to really make the role his own." Wentworth Courier & Sydney Central Magazine 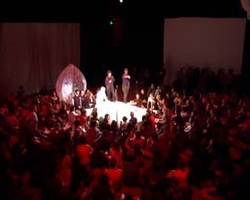 "Emergence" at the Sydney Opera House
"Nick Curnow, who plays Ram, the creature being sculpted and bred, cunningly solicits sympathy all the while simmering with an underlying creepiness. Even when lying asleep in his cot. On each step along his development, Ram manages to hold onto both qualities with an unnerving charm. Fragility with a slight distance to his eyes carrying forth his tortured and potential soul." Soon Van on RandomEcho

"Nick Curnow brilliantly plays the lead as the prototype Ram. He breathes life into an essentially lifeless creation with his expressions and gestures - his presence and charm really pulled the audience in." SameSame.com.au

"Emergence is a fascinating show and delivers a genuine poignancy..." The Age, Melbourne 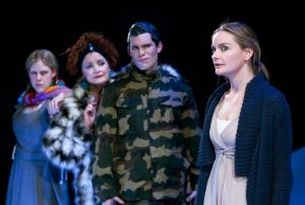 GOD'S EAR (Pursued by a Bear, Seymour Theatre)
"Nick Curnow as dialect coach has done an absolutely superb job - you almost believe the cast is American, which is a massive achievement." Review for God's Ear by Jenny Schwartz at the Reginald - Stage Whispers Magazine

THE COMING WORLD (Darlinghurst Theatre)
"...The two WAAPA graduates [Ian Meadows and Cheree Cassidy] have completely nailed the Boston accents (and it’s a fun accent to listen to)..."
Emma Salkild, The Alternative Media Group of Australia

The cast of "The Weir" - New Theatre 2012 - Photo by Matthias Engesser
THE WEIR (New Theatre)
"The whole cast speaks with a convincing accent; something which is either done well or best left alone. I wouldn’t be surprised if Patrick Connelly is a native of the area, so good was his effort." Joan Beal, ArtsHub

"Dialect coach Nick Curnow should be commended for the effort that’s gone into catching the Irish accent for the stage." Aussietheatre.com.au

"McPherson’s quirky, engaging characters are fleshed out with charm by this troupe, and maintain highly credible accents throughout. No mean feat, to be sure." OzBabyBoomers 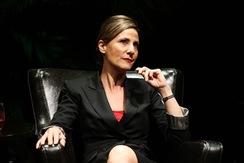 "Zoe Carides is brilliant as Minka and the accent is great." - SameSame.com.au

FOUR FLAT WHITES IN ITALY (Ensemble Theatre)
"If you like a good kiwi accent, then this is the play you have been waiting for!" - AussieTheatre.com 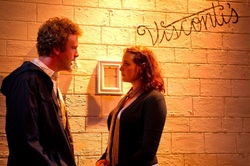 Andrew Henry & Julia Grace in "Reasons to be Pretty"
REASONS TO BE PRETTY (Darlinghurst Theatre)
"The production's creatives are excellent, voice and dialect coach Nick Curnow especially, as the American-ness of the play is essential to its authenticity." Stagenoise 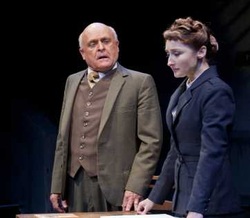 Danny Adcock & Sharon Millerchip in "A Picasso"
A PICASSO (Ensemble Theatre)
"They owned their mannerisms and accents, so much so that you honestly questioned if there were a few more German soldiers guarding the theatre doors." Alternative Media Group of Australia

"Stage accents, his Spanish, hers German ... are modified for clear, effective delivery and consistency. StageWhispers

BEAUTIFUL THING (Burley Theatre)
"Nick Curnow has done a splendid job as dialect coach: none of the cast has any serious lapses in this (or any other) respect." Lloyd Bradford-Sykes, Curtain Call
All website content (c) 2022 Nick Curnow, all rights reserved.