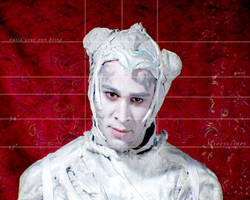 Nick as Ram - Emergence 2007
Nick Curnow is a talented and versatile actor for both stage and screen. Having a Bachelor of Arts in Performance from University of Western Sydney's Theatre Nepean and an MFA (Voice) from NIDA, he has appeared in film and television from no budget student films to award winning shorts, national television and international commercials. He has trod the boards of the big stages across Sydney like the Sydney Opera House Studio, Belvoir St, and The Stables, to the vibrant fringe venues of the Old Fitzroy, New Theatre, or Seymour Centre. His work has also toured nationally to venues like the Melbourne Arts House and Canberra Street Theatre.

Well versed in verse, and a powerful character actor, he has wowed audiences and critics alike with his performances in such shows as Fully Committed in 2014 and as part of the 2013 Sydney Fringe (see reviews here), as Martin Luther in Wittenberg (2014), and in Take Me Out as part of the Mardi Gras Festival in 2009. He also brought forth the unique and unsettling Being-in-Progress in Synarcade's Emergence and Build Your Own Being - now an interactive online creation! He appeared on ABC TV's short series Paula's Guide to Love and made an appearance in the Nine Network's Cops LAC.

He is highly sought after for his talent and knowledge as a voice actor and specialist. Experienced in all forms of voice over and narration as well as ADR, he can differentiate between New York and New England, Liverpool and Lancashire, give you a Texan or a Russian, a Kiwi or a Cajun, or any other voice you might need. He has provided voices for Kiwi nut bars, Spotify trailers, recreated the iconic voice of Hal-9000 for SBS Australia, was approved by Peyo's own family to play Vanity Smurf for an international touring Smurf show, and helped Korean children learn English through a comprehensive teaching and learning app.

He is passionate about new work and regularly engages with fringe and independent theatre events such as Off The Shelf, Brand Spanking New and Short & Sweet, all of which aim to promote the development and visibility of new writing, new talent and new ideas.

Scroll down for his full resume and biography! For links to examples of his work and other online presences, see the Links page.

Nick was born and raised on Sydney, Australia's North Shore. He moved progressively further away from home in his schooling, from Lane Cove Primary to Chatswood Primary’s Opportunity Class for the final two years of primary school, then from there to the state selective Fort Street High School across the Sydney Harbour Bridge and into the Inner West.

Having been a keen singer in his childhood, touring to Japan in 1994 with the Sydney Children’s Choir and then in the NSW Public Schools Singers, he was increasingly drawn to the world of acting, taking up drama in school (which only became an available curriculum subject in 1998), and gaining a place in the highly selective NSW State Drama Company. He toured with the Company to England in his final year of high school, and while on a coach from London to Yorkshire, was offered a place in the University of Western Sydney’s Theatre Nepean (alma mater of other accomplished Australian actors such as David Wenham, Joel Edgerton, Yvonne Strahovski, Celeste Barber, Marika Aubrey, Nicole Da Silva and Jared Turner). Here he not only received top class acting training, but also learnt to weld, sew, dye, and write a funding application! After graduating with Distinction he dove straight into theatrical work, building an extensive resume of independent productions covering Shakespeare, Australian, American, British and Mexican theatre, as well as appearing in dozens of short films.

In 2006, after his agent closed its doors he ran away to Armidale in the New England region of New South Wales. Here he studied all the things he couldn’t in his acting degree – such as linguistics, philosophy of language, directing, ancient history – and returned to Sydney renewed and refreshed, ready to commence a new phase of his career. To his surprise he was offered one of only two coveted places in NIDA’s post-graduate Voice Studies course in 2007, then only run every second year, and which would end up being the final year of the program offered under that structure. Here he studied under respected voice teachers including Bill Pepper, Betty Williams, Jennifer West, and Frankie Armstrong, speech pathologist Jocelyn Priestley, and worked on productions with yet-to-be-discovered actors like Alex Russell, Rick Donald, Jessica Marais, Hugh Sheridan, Ryan Corr, Lisa Gormley. While here he wrote his dissertation on Cognitive Approaches to the Teaching and Learning of Accent & Dialect for Performers, which was to form the basis of future practice led research in his teaching. He was also seconded to teach at Singapore’s LaSalle SIA College of the Arts where he taught the graduating year accent and dialect and coached their graduating production.

Since graduating from NIDA he worked as an actor on stages across Sydney, in television and film, and on the web. He developed a reputation as one of Sydney's best accent and dialect coaches, working with performers both young and old, experienced and new. He directed short and full length plays to critical acclaim.

In 2017 he undertook a self-initiated three month attachment at the University of North Carolina at Chapel Hill's Professional Actor Training Program, shadowing then Head of Voice and co-founder of the Miller Voice Method, John Patrick. While here he was also attached as co-vocal coach to Playmakers Repertory Company's production of Kate Hamill's adaptation of Sense and Sensibility. Inspired deeply by his contact with Miller Voice Method, Nick sought out contact with founder Scott Miller at NYU Tisch and has subsequently maintained a connection with Miller Voice Studio, being named an Associated Teacher.

This experience lead to converting his Graduate Diploma from NIDA to their new Master of Fine Arts (Voice) in 2018. Here he studied pedagogy and curriculum design in depth, as well as conducting a formal research project developing the ideas of his earlier dissertation, seeking to contribute more deeply to the connection between current linguistic research and current voice pedagogy.

Upon graduation, he was offered the position of Lecturer in Voice at the Elder Conservatorium at the University in Adelaide - Australia's oldest Conservatorium. Now based in Adelaide, but still pursuing further training and certification (now that it is available) in Miller Voice Method, Nick looks forward to adding greater accomplishments to his list of personal and professional achievements.